It’s the season of giving, and Americans are speaking up about what they really want for the holidays this year. Hint: more than likely, it’s something green that doesn’t grow on Christmas trees.

Some key findings include:

61 Percent of Americans Prefer Cash to Other Holiday Gifts

What’s the reason for the shift? Perhaps Americans are embracing practicality after years of receiving gifts that remain unused on shelves, or worse, in the trash. Economist Joel Waldfogel discovered that people value gifts 20 percent less than items they buy for themselves.

Interestingly, only 19 percent of those surveyed want to give cash. While 21 percent of gift-givers try to combine gifts and cash together into a gift card, a 2018 study by MarketWatch revealed that $1 billion in gift cards go unused each year, so much so that there is now an online market to resell unclaimed and unwanted gift cards. 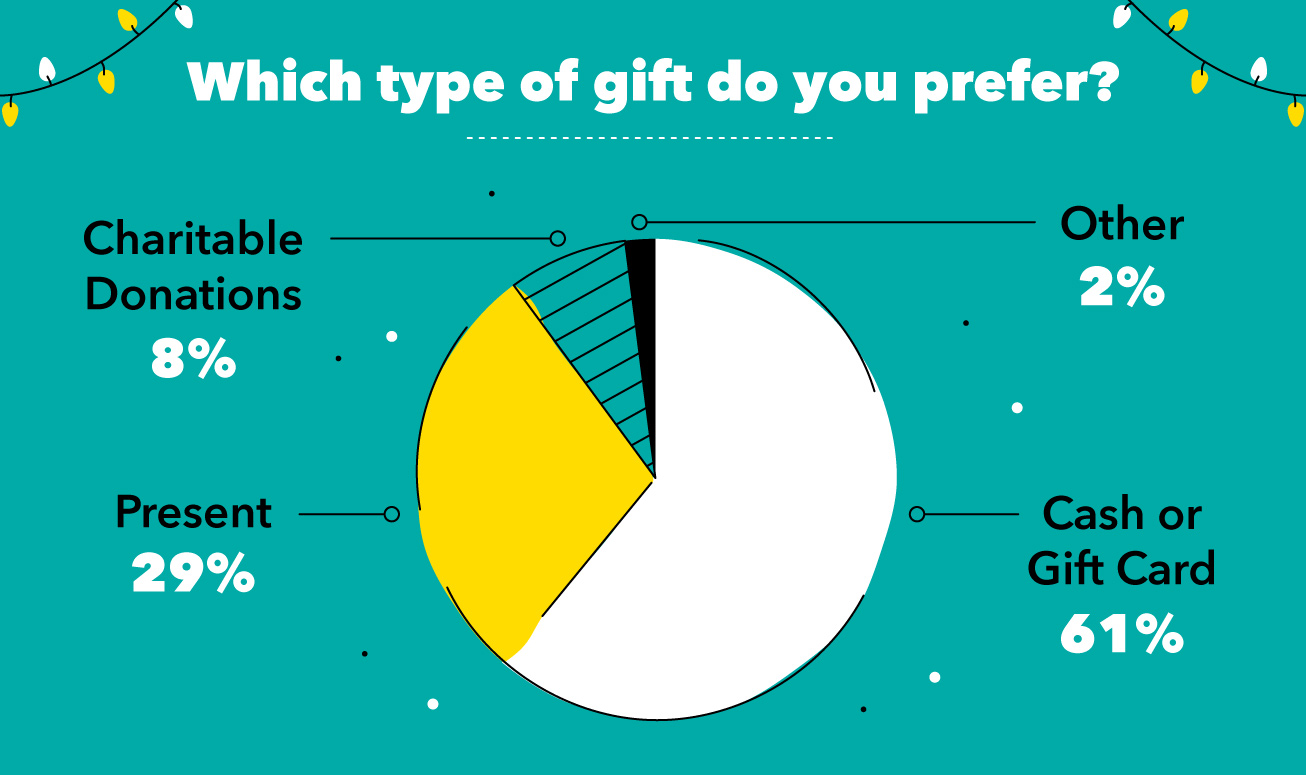 Americans Want to Get Cash, Give Presents

As the old saying goes: it’s better to give than to receive. This study even backed this up with science, revealing that spending on others results in more happiness than spending money on ourselves. The tradition of gift-giving and its place in our society has long been studied by psychologists and anthropologists, and despite more Americans reporting financial strains during the holiday season, gift-giving doesn’t appear to be going anywhere.

3 in 5 Women Prefer a Thoughtful Gift

While 60 percent of men rank usefulness as the most important function of a gift, 60 percent of women prefer thoughtful presents. Women were more likely than men to prefer these sentimental gifts and women aged 35-54 were most likely to ask for something with meaning behind it.

Behavioral economists from San Fransisco State University have found that gifting experiences leads to greater happiness than giving material possessions. If you are going for the sentimental factor in your holiday gift-giving, consider buying a golf lesson instead of golf clubs, or a cooking class in place of a new blender. 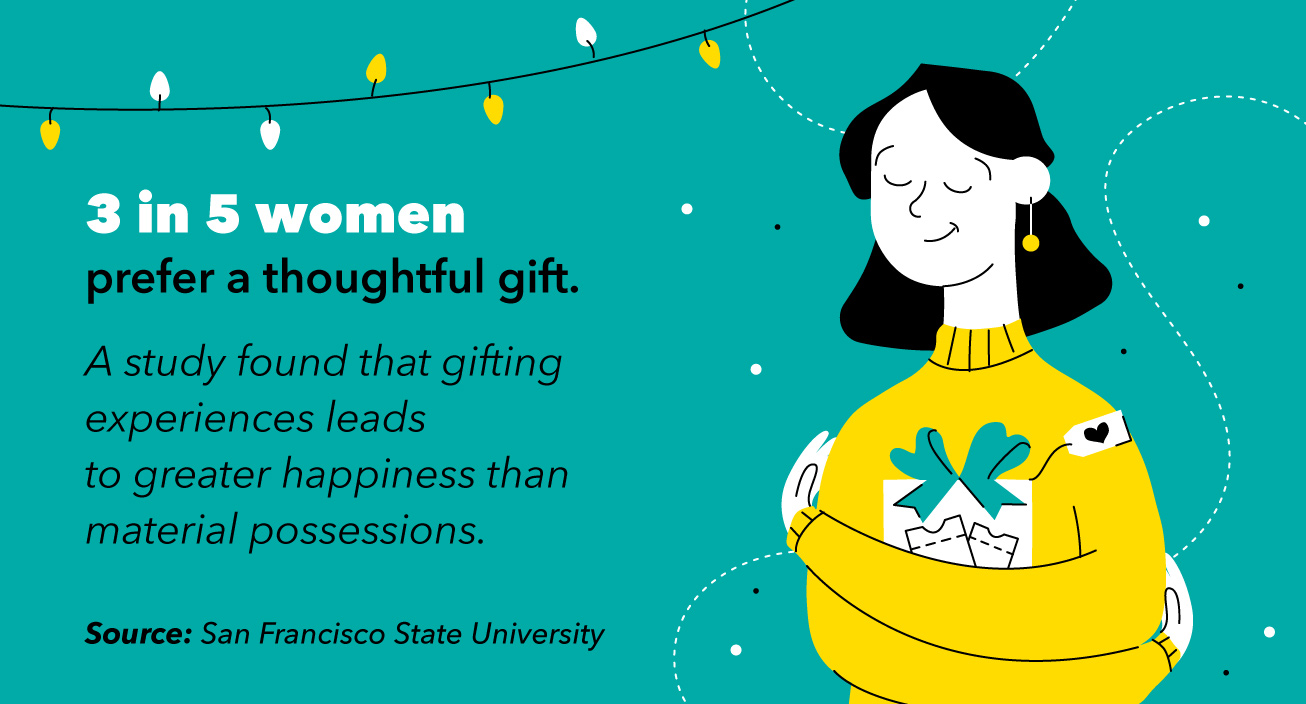 Seniors Are the Most Generous Gift-Receivers

While only 7.9 percent of Americans preferred a donation on their behalf instead of a gift, approximately 1 in 4 seniors rate a charitable donation as their preferred gift to receive. According to Nonprofit Source, 30 percent of all annual giving occurs in December, with 10 percent occurring in the last 3 days of the year.

Giving to charity over the holiday season pays in more ways than one. In addition to good fortune, you can also receive a tax write off for your donation. 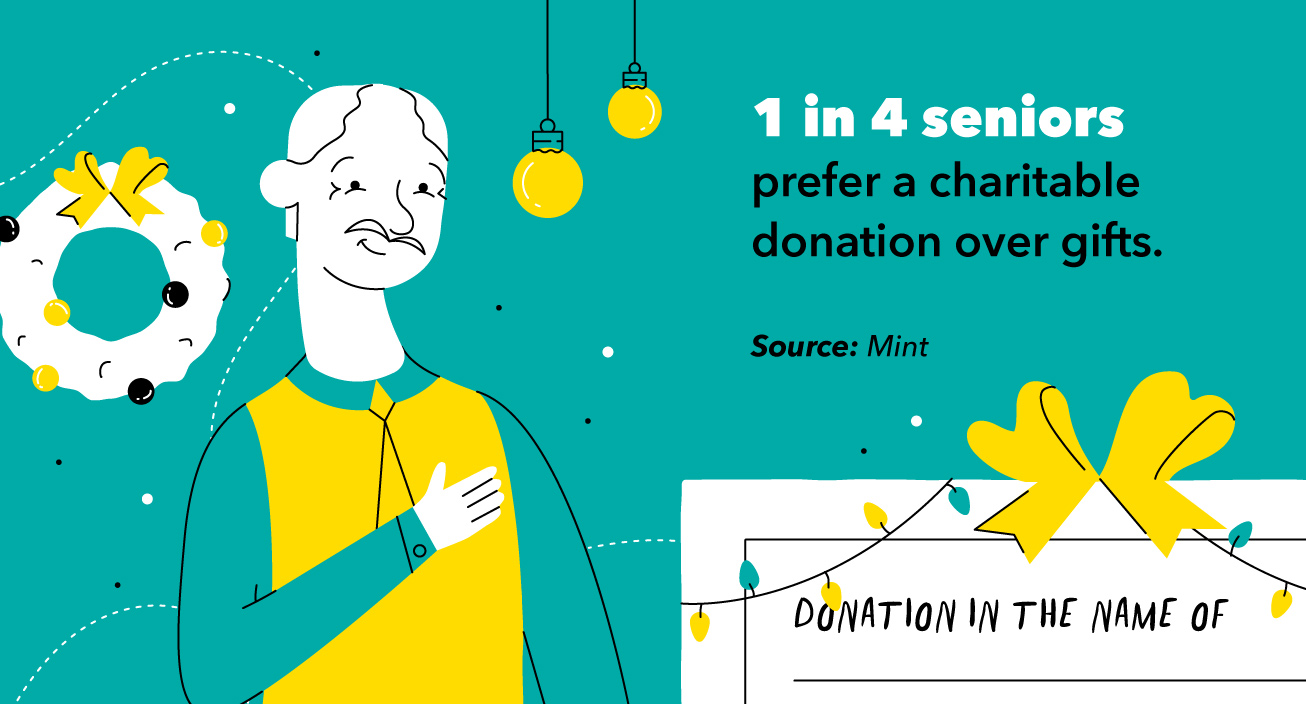 With most Americans ditching the traditional act of gift-giving in favor of a more transactional approach, don’t feel like you need to give everyone something. Try suggesting a gift exchange to cut down on the number of gifts you need to purchase, or simply be upfront with loved ones that you are cutting back this year to prevent holiday debt hangover.

This study consisted of one survey question conducted using Google Surveys. The sample consisted of no less than 1,000 completed responses per question. Post-stratification weighting has been applied to ensure an accurate and reliable representation of the total population. This survey ran during October 2019.

The post Survey: 61 Percent of Americans Want to Get Cash This Holiday Season, Don’t Want to Give It. appeared first on MintLife Blog.

How to Create an Emergency Budget to Deal With COVID-19

Why you should track your spending (and why Quicken sucks)

Garnier Shampoo and Conditioner only $0.50 at CVS!

JCPenney: Carter’s Rompers & Creepers only $3 each!

EconomyNews - July 26, 2019
0
Hot Deals
July 26, 2019 | GretchenAdd to my favorites This post may contain affiliate links. Read my disclosure policy here. Stock up on baby clothes with this...

How Does A Lapse In Car Insurance Affect Future Insurance Rates?

What Does At-Fault Mean?

Get Your Money: Start Your Budget on a Saturday

How To Create A Budget Friendly Spread For Fourth Of July

How to Create a Budget Schedule that Works for You